The Main Military Hub in Tibet 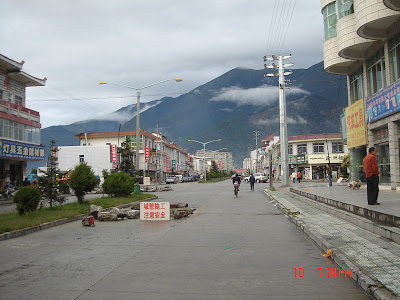 This article in The Hindu is extremely misleading (as often with the Chennai paper when it reports about China).
First, the Nyingchi (Tibetan: Nyingtri) prefecture is already one of the two main tourist 'hubs' on the Tibetan plateau (with Lhasa).
I have several times mentioned on this blog the fast track development of the region.
Mass weddings of Han Chinese are often organized; tourists come from the Mainland to celebrate Valentine Day in this 'paradise on earth'.
Hundreds of thousands of Chinese tourists are yearly visiting the place, located north of the McMahon Line.
Vice-President Xi Jinping himself came in July last year.
Therefore it is wrong to say that it will be a new 'hub', it is already a very important and developed one in Tibet.
But there is worse in The Hindu's article, it says that the 'new' tourist hub "deal a blow to hydropower lobby groups who have proposed the construction of a massive dam on the Brahmaputra's 'Great Bend". It is absolutely wrong.
On the contrary, it could be a great advantage.
If one looks at the history of the mega project since the early 1980's, one of the main issues was the access of the Yarlung-Tsangpo (later Siang and Brahmaputra in India) Gorges.
The problem of access was partially solved when a tunnel to Metok (Chinese: Mutao) was opened in December 2010 (at the time of Premier Wen Jiabao's visit to India).
But the infrastructure remained a serious issue to even envisage a project of this scale. With the new developments, it will be much easier for the Chinese engineers to draw the plans for a mega power plant in the Great Bend.
I have also mentioned on this blog that the railway line will probably be extended in a few years time to Nyingchi.
But there is more serious implications for India.
Bayi, located in Nyingchi prefecture, not far away from by the Airport on the Yralung-Tsangpo river, is the main military 'hub' in Tibet today.
It is an ideal place for the People's Liberation Army (PLA), just a few kilometers north of the McMahon Line.
Guess who will benefit the new infrastructure coming along  with the enlarged 'tourist hub'?
It is the PLA.
'Bayi' is a PLA town.
Bayi means 'Eight-one" or 'August 1'.
It refers to the anniversary of the Nanchang Uprising, considered to be the founding date of the People's Liberation Army.
The name of 'Bayi' is 'copyrighted' by the PLA which is alone entitled to use it for important militarily projects/bases. The town of Bayi was established soon after the invasion of Tibet by the 18th Army (part of the Second Field Army based in Sichuan) in the early 1950s.
It is today one of the two main PLA bases in Tibet, coming under Chengdu Military Region. 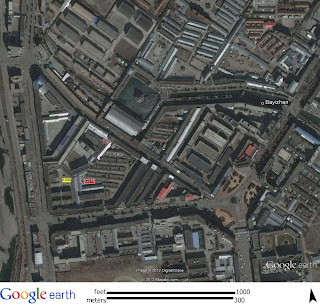 Xi Jinping, the future President of China who is also the Vice-Chairman of the Central Military Commission spoke recently of Chairman Mao’s theory of  “the synthesis between the requirements of peacetime and  war.”
In other words, civilian infrastructure projects such as roads, airports and railways should be designed to also serve war-time needs (with India, in this particular case).
In 2007 Xi also declared “we must implement Mao’s strategic concept of the ‘unity between soldiers and civilians’ and both the army and regional civilian authorities should assiduously pool our resources in the preparation for military struggle.”
To speak about 'tourist hub' while ignoring the other aspects is misleading.

China's tourism plan quells Brahmaputra dam fears
Ananth Krishnan
The Hindu
June 24, 2012
Chinese plans to build a major tourism project and national park in a Tibetan county have dealt a blow to hydropower lobby groups who have proposed the construction of massive dam on the Brahmaputra's 'Great Bend', where the river begins its course towards India.
The Chinese government announced on Saturday it had earmarked 400 million yuan ($63.5 million) to develop tourism in Nyingchi prefecture in south-eastern Tibet. The plans include an ambitious proposal to raise two billion yuan ($317.5 million) to build an "international tourism town" in the border prefecture.
The "golden tourism" project in Nyingchi follows the opening of Tibet's first national park in the same county in December in the Grand Canyon of the Yarlung Zangbo river, as the Brahmaputra is known in Tibet.
The plans appear to signal the government's moves to develop the region as a tourism hub, amid rising pressure from hydropower groups to tap the enormous potential of the canyon and the 'Great Bend', where the river spectacularly falls over 1,000 metres.
A number of hydropower lobby groups have called on the central government to give the green light for as many as 28 proposed dams on the Yarlung Zangbo. China has, so far, only embarked on one hydropower project, a run-of-the-river dam at Zangmu on the river's middle reaches which officials say will not impact downstream flows.
Of particular concern to Indian officials was a proposal by Sinohydro, an influential state-owned hydropower company, to build a massive 38-gigawatt project at Motuo near the ï¿½Great Bend', a dam that would surpass even the Three Gorges project in scale. Environmental groups have raised concerns about the plan's impact on both the sensitive ecosystem of the region and on downstream flows.
Wang Songping, deputy chief of Tibet's regional tourism bureau, was quoted as saying by state media that the national park at the Yarlung Zangbo Grand Canyon would be run by a committee "responsible for environmental protection", and would "follow an internationally-accepted practice in its management of tourism resources and minimise harm to the plateau ecology." The park stretches across several counties in Nyingchi and Qamdo prefectures.
The plan for the park has disappointed hydropower groups pushing for the projects. Zhang Boting, deputy secretary-general of the Chinese Society of Hydropower Engineers, told The Hindu in an interview last year that a dam on the ï¿½Great Bend' could save up to 100 million tonnes of coal. But he did acknowledge there were technical barriers to putting in equipment, with the river falling by over 1,000 metres over steep gorges.
India and China will this month discuss the issue of trans-border rivers in a working group meeting. Chinese Premier Wen Jiabao told Prime Minister Manmohan Singh during talks last week on the sidelines of the Rio+20 summit that China was willing to strengthen communication with India on the issue, and would share hydrological data.
Chinese officials have in talks sought to address Indian concerns over long-discussed proposals to divert the Brahmaputra's waters, under the western route of the massive south-to-north water diversion project.
Work on the central and middle routes, which divert water from the Yangtse river to the arid north, is already in progress.
Chinese officials said on June 19, during a working conference on the project, that "construction of the final west route, which is hampered by difficulties of crossing the 3,000-5,000 metre-high Qinghai-Tibet Plateau, is not yet scheduled to begin."
The Nyingchi tourism project, officials said, also will include 22 "model villages" built over three years at the cost of 100 million yuan ($15.8 million), where residents will provide family hotel services for tourists. Indian officials rejected media reports which claimed the tourism project in the border prefecture would have bearing on the long-running boundary talks, pointing out that the relevant region was not part of the dispute and was a region where India did not hold any territorial claims.
Posted by Claude Arpi