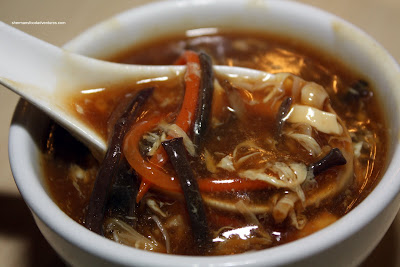 No comment!
Except an advice, avoid eating cat soup!


In China, cat soup to die for?
In China police say a business tycoon died when he ate a dish of prized cat soup. The soup was poisoned.
Christian Science Monitor
Peter Ford, Staff writer
January 6, 2012
Beijing
Serves him right, you might think, for tucking into Mittens.
Police in the southern Chinese province of Guangdong say that local business tycoon Long Liyuan died when he ate a dish of deliberately poisoned cat soup.
Diners in Guangdong, known in English as Canton, are well known for their exotic culinary tastes. They boast that they will eat “everything on the table except the legs.”
How's your China IQ? Test your knowledge of China – take our quiz.
That habit can have tragic consequences – and not just for the snakes, rats, monkeys, and scaly anteaters that get tossed into Cantonese pots. The SARS outbreak in 2003 that killed 321 people in mainland China is thought to have started when someone in Guangdong ate a civet cat carrying the disease.
But it wasn’t the cat that killed Mr. Long, according to police. It was the extract of Gelsemium elegans, a poisonous creeper known as “heartbreak grass,” that local official Huang Guang put in the cat hotpot.
Mr. Huang owed Long money and could not pay it back, according to the Legal Daily newspaper, so he invited his creditor to lunch with another man, and poisoned the food. The third man found his cat soup “more bitter” than usual and ate only a little, according to media reports. Huang himself – presumably so as not to arouse suspicion – ate a healthy portion and almost went blind, while Long went into cardiac arrest and died.
Huang confessed to the murder after a lengthy interrogation, according to the Legal Daily.
Cat meat is prized in Guangdong not so much for its taste as for its symbolism. Cats are a stand-in for tigers, in the same way that chickens represent the phoenix and snakes do duty at the table for dragons.
Tigers, phoenix birds, and dragons are powerful animals in Chinese iconography, though what they taste like, I have no idea.
Posted by Claude Arpi