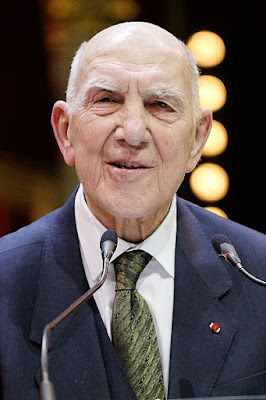 I repost an old-article published in the DNA about Stéphane Hessel who passed away yesterday.
During World War II, he served with the Central Bureau of Intelligence and Action of General de Gaulle's government of Free France and fought against Nazism.
After the War, he continued to fight many battles for freedom and respect of human dignity.
He was a great human being.

Very few in India have heard of Stéphane Hessel, though the 94-year old former diplomat and Buchenwald concentration camp survivor has been selected as the Man of the Year by a serious survey in France.
Born in Germany from Jewish parents, Hessel was a naturalized French citizen in 1939; two years later, he joined General de Gaulle in London and entered the French Resistance. Back in France, he organized the Resistance’s communication networks, but was later captured by the Gestapo and deported to Buchenwald concentration camp. He was lucky to be able to escape during a train transfer in 1944.
In the West, he is today an icon, not because of his war deeds, but for an insignificant-looking booklet that the old man wrote in October last year. At first only 6,000 copies of Time for Outrage! (Indignez-vous! in French) were printed. In a matter of weeks, it was translated in several languages and more than 3 million copies were sold worldwide.
He was even named as one of the top global thinkers by the Foreign Policy magazine in the US: “for bringing the spirit of the French Resistance to a global society that has lost its heart”.
While some only saw left-wing propaganda, others highlighted the lack of literary values: “It is repetitive, unoriginal, simplistic and frustratingly short,” wrote The Independent. But ‘Indignez-vous’ symbolizes more, much more than its 14 pages. It has become a symbol of the ‘outrage’ of modern society against many crying injustices and the pervasive power of money.
Hessel strongly believes: “When something outrages you, as Nazism did to me, the time has come when you should become a militant, fervent and engaged. …You should join the great current of history which continues to flow only because of the engagement of each and every one of us.”
This may remind you of some revolutionary movements, but Hessel insists that the ‘indignation’ should be strictly non-violent; he had witnessed enough violence during WW II.
In 4,000 words, Hessel caught something more universal, the outrage of the youth against injustice, servitude, inequality and a society uniquely based on false values.
In 2011 in Spain, those who protested against the Government’s economic politics became known as Los Indignados (The Outraged Ones). Hessel’s pamphlet inspired other protests across the world, whether it is in Greece, UK, Chile, Israel, or the Occupy Wall Street movement.
The great merit of the old Resistant is that he was able to catch a planetary wind of change, as did Bob Dylan (another Jew) in the 1960’s when he sang “The Times are a-Changin”.
Hessel based his arguments on the spirit of the Resistance. Youth should have the courage to be ‘outraged’ and stand up against the society’s ills (in his case, it was against Hitler’s philosophy and methods). The Resistants fought, according to Hessel not only for freedom from the Nazis’s yoke, but also for a more just society with higher economic, social and democratic values.
In the Indian context: the Hazare Movement, with all its limitations, symbolizes the outrage of the people of India vis-a-vis the pervading corruption of its political leaders. And if millions are ready to follow the old Gandhian leader in his crusade against illicit money, it is not because they believe in Anna Hazare’s life style, but because they don’t accept any more the ‘fait accompli’ that the powerful can loot the State and manipulate the democratic set up of the nation.
For Hessel, the worst attitude is ‘indifference’. He writes: “the reasons to be indignant can seem today less obvious [than during the Resistance]. … [because] we live in an interconnected world like never before, but in this world there still are intolerable things.”
These ‘intolerable things’ should trigger youth’s outrage, whether in the West, in emerging nations or in poor continents like Africa. While Hessel applies his argument primarily to Europe and France, the principles that he expounded in a few pages are universal: “I say to the young people, the worst of attitudes is indifference, to say ‘I can do nothing, I'll just manage to get by’ …You lose one of the essential elements that makes human being [different]: the faculty of indignation.”
A few weeks ago, in another context, using other ways, thousands of villagers of Wukan in South China stood up against the ‘intolerable’ land-grabbing practices of the local Communist authorities and for the first time in decades, the Power backed down. ‘Outrage’ worked.
Hessel concluded: “I wish for you all, each of you, to have your own motive for indignation”.
While some have prophesized that 2012 will mark the end of the world, let us hope that we will simply see the end of Indifference. It is perhaps the first step for a better world to manifest.
Posted by Claude Arpi