Why India does not develop border roads 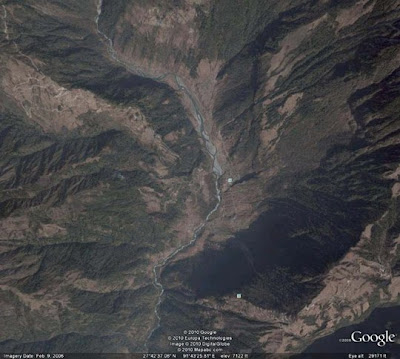 An article in The Times of India explains why the government spent only 3% of the alloted funds for the border roads. The ToI quotes the Defense Minister: "Even as he castigated Pakistan for not dismantling the over 40 terror-training camps still operational on its soil, defense minister A K Antony on Wednesday said India was not 'paranoid' about China despite the festering border problem with it."
Let us remain cool!


97% of funds for building roads along China border unspent: CAG
Pradeep Thakur, TNN,
May 13, 2010,
NEW DELHI: Building roads along the China border has been a stated priority of the UPA government in view of the communist neighbour rapidly developing world-class roads and airports on its side of the McMahon line. Such has been the security concern that supplementary grants were sanctioned for additional expenditure in the border areas. Shockingly, however, not only were the supplementary grants not used, up to 97% of regular funds for the purpose remained unspent between 2006 and 2009 and were returned by the home ministry departments at the end of the financial year.
The Comptroller and Auditor General's review of grants to home ministry for infrastructure development along the China border reveals that "large provisions persistently remained unutilized during the period 2006-09 and were surrendered, defeating the purpose for which the budget provisions were passed by Parliament".
Interestingly, while lack of environmental clearances for border projects has often been touted as the reason why border roads have not been built in recent years, the report doesn't mention this at all. It puts the blame on administrative failure in allocating works, non-demarcation of border areas and local protests are some of the factors behind the failure.
The CAG report, submitted in Parliament on Friday, says the unspent amount on capital expenditure — that includes development of infrastructure along the border and other security-related spending — was as high as 58% in 2008-09 while allocation for this purpose had been hiked from Rs 2,000 crore in 2006-07 to Rs 5,300 crore in 2008-09.
On the China front, the home ministry failed to execute road projects resulting in non-expenditure of 91% of the allocated funds in 2006-07 and 97% each in 2007-08 and 2008-09, according to the CAG report. The report found inaction on the coastal security front as well.
Posted by Claude Arpi