Was Beijing informed of the Russian move 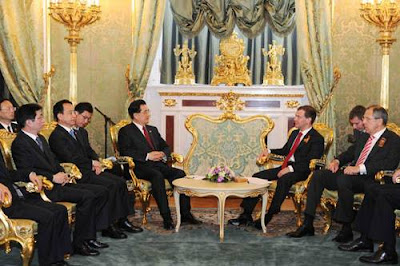 As I mentioned in a recent posting, an article in RIA Novosti "Russia ready to help reconcile China, Dalai Lama" quotes Russian Foreign Minister Sergei Lavrov as saying: "Russia is ready to help settle the conflict between China and the Tibetan spiritual leader Dalai Lama". This raises a lot of questions.
The move is particularly surprising after Hu's visit to Moscow and the 'new security concept' ("in essence, to rise above one-sided security and seek common security through mutually beneficial cooperation … and refrain from interfering in other countries' internal affairs').
Was Beijing informed about Lavrov's declaration?
Is Beijing trying to send a message to the Dalai Lama through a 'friend'; the message being "drop politics, concentrate on religion and we can find a solution"?
Possible!


Hu Calls on Russia to Shape New International Political Order
China Brief Volume: 10 Issue: 10
May 13, 2010
Russell Hsiao
At the invitation of Russian President Dmitry Medvedev, Chinese President Hu Jintao visited Moscow from May 8 to May 9. The occasion marked the 65th anniversary of Russia’s Great Patriotic War, which celebrates the Soviet Union's victory over the Nazis in World War II. Hu lauded the sacrifices made by the Russian people during the fight against "fascism," and used the occasion to highlight the history of cooperation between China and Russia. The Chinese head of state’s participation at the symbolic parade can be interpreted as a signal of Hu’s determination to forge a close strategic alliance with Russia against the backdrop of the World War II anniversary event. Indeed, according to Russian state-owned RIA Novosti, Hu called upon Russia and China to consolidate their strategic partnership, and promote "multipolarity" (duojihua) in the international system and the "democratization of international relations" (guojiguanxi minzhuhua) (World Journal [Chinese], May 10). To be sure, China's vision of a "democratic international order" would place legitimate authority with the United Nations, where China and Russia—as veto-wielding permanent members of the UN Security Council—possess great influence.
Hu’s packed itinerary included meeting with President Dmitry Medvedev and Prime Minister Vladimir Putin, attending Russia’s 65th anniversary Victory Day Parade on the Red Square, and meeting with Russian veterans that fought in China’s northeast against the Japanese Imperial Army. Other prominent Chinese officials that accompanied Hu’s visit included Secretary of the Central Secretariat of the Chinese Communist Party (CCP) and Director of the General Office of the CCP's Central Committee Ling Jihua, Secretary of the Central Secretariat of the CCP and Director of the CCP's Policy Research Office Wang Huning, and Chinese State Councilor Dai Bingguo, among others (China Daily, May 8). Hu's visit represents a continuation in the flurry of high-level contacts between the two sides and marks the second time that the heads of state met within the span of one month. Medvedev and Hu met on the side of the financial conference held in Brasilia on April 15 for the 2010 BRIC (Brazil, Russia, India and China) conference.
During Hu’s meeting with Russian veterans that fought with the Chinese against Japan, President of the Russian Academy of Military Sciences and General of the Russian Army Makhmut Gareyev noted that, "the Soviet and the Chinese people assumed the heavy responsibility of fighting the aggressors during the world anti-fascist war, paid a huge sacrifice and made an outstanding contribution to the final victory" (PRC Embassy [Denmark], May 9). Hu reciprocated Gareyev's statement by emphasizing that, "we [China and Russia] should advocate a correct view of history and the new security concept of mutual trust, mutual benefit, equality and coordination under the current fluctuating and complex international situation, cooperate closely in international affairs and jointly maintain regional and world peace" (PRC Embassy [Denmark], May 9).
In his meeting with Putin, Hu told the Russian prime minister that "China-Russia relations are now enjoying a sound momentum of development and the two countries have made much headway in their cooperation in all fields" (PRC Foreign Ministry, May 9). Hu stressed that as strategic partners, Beijing and Moscow share extensive interests on many major issues. Under the current historic circumstances, he added, the two countries should work together, support each other and deepen their all-round strategic cooperation to better safeguard their common interests and world peace and promote common development (PRC Foreign Ministry, May 9). Putin praised Hu's presence at the ceremonies as demonstrating the high-level strategic cooperative partnership between the two nations (PRC Foreign Ministry, May 9).
Using the diplomatic stage offered by Medvedev's invitation, Hu advanced China’s "new security concept" (xin anquan guan) as the harbinger for future cooperation between Beijing and Moscow. According to the Chinese Foreign Ministry, China's "new security concept," is, "in essence, to rise above one-sided security and seek common security through mutually beneficial cooperation … and refrain from interfering in other countries' internal affairs and promote the democratization of the international relations" (PRC Foreign Ministry, "China's Position Paper on the New Security Concept," August, 6, 2002). While this is not the first time that the Chinese leadership articulated this concept, the largely symbolic yet historically significant stage commemorating the end of World War II lays bare the observation that in spite of some signs of competition with Russia, Beijing still sees Moscow as a strategic partner in its effort to shape a new international political order (China Times [Taiwan], May 10).
Posted by Claude Arpi