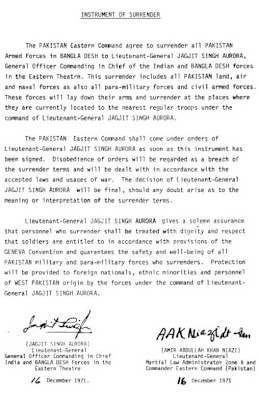 The declassification saga finally takes some momentum. Several newspapers have covered the 'loss' of historical documents by the Eastern Command after the 1971 Operations.
The work of Kuldip Nayar to get the Henderson-Brooks declassified is also mentioned.
What is most surprising is that the Opposition did not say anything during the recent Parliament session. It is true that IPL was going on and it takes primacy over everything else.

Regarding the 'lost' papers on the Mukti Bahini operations, it is possibly linked with the Tibetan participation in the Liberation War of Bangladesh.


Chief Information Commissioner Asks India To Declassify 1971 War Documents
11 May, 2010
Dinesh Singh - Rawat
New Delhi (ABC Live): Chief Information Commissioner of India Wajahat Habibullah has asked Indian Government to declassify documents related to the 1971 war records in Eastern Army Command.
Stating on the issue, CIC categorically explained that the "law is quite clear" that all records "older than 20 years must be disclosed, except under specific circumstances".
"There are rules allowing for destruction," but only after set procedures to do so.
On Illegal destructions of records by authorities, Mr.Habibullah further clarified that there is provisions under criminal act to deal with unauthorized destruction of government official records.
Posted by Claude Arpi