Protest in Tibet for New Year 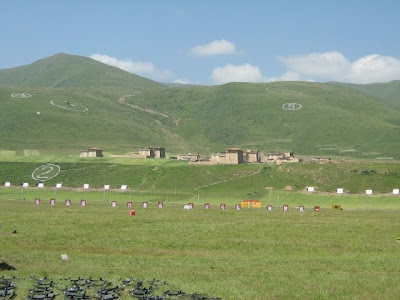 I am wondering why the Tibetans are so keen to find a solution within the framework of the People's Republic of China.
Today China is not even ready to allow them to eat tsampa (barley flour) on their New Year. Where is the question of autonomy?

Tibetan New Year marked with protest in Tibet
Phayul
by Kalsang Rinchen
Mundgod, Karnataka, February 15 – A sit in protest by around 400 Tibetans on the first day of the Tibetan New Year led to a standoff between the Tibetan protesters and Chinese security forces in Ngaba County.
The Tibetans sat at the main market square and ate dry Tsampa and breads in a symbolic expression of a mournful New Year, according to the Emergency Coordination Committee of the Kirti Monastery in exile.
The monks and laypeople said prayers and threw Tsampa in the air to mourn the killings of several Tibetans in the 2008 protests all over Tibet. The monks sitting at the protest are from Ngaba Kirti Monastery and Sey Monastery.
As tension escalated, Duedul Trulku of Kirti monastery’s religious affairs body arrived at the protest site and urged everyone to return home to avoid any untoward incidents but his requests fell on deaf ears. Later, they asked the monks of Kirti monastery to return to their quarters but monks of other monasteries and laypeople joined the protests.
The Chinese soldiers confiscated mobile phones of people who took video and pictures of the protest. Tension has been looming large on Ngaba County since the 29th day of the closing year that saw a large gathering of Tibetans at a special religious dance amid tight security.
At the time of this report going online the army had blockaded the routes to the square to prevent Tibetans from outside to join the protests.
“The Tibetans in Ngaba are showing the Chinese government that they are not celebrating the New Year the way the government wants but observing it to mark their respects to the Tibetan martyrs who laid down their lives,” said Tenzin Choeying, the president of the India chapter of the Students for a Free Tibet.
Tenzin Tsundue, Tibetan independence activist said that the protest in Ngaba is a display of absolute resilience of the Tibetans inside Tibet. “It is also a demonstration of solidarity and respect for those Tibetans who gave up their tomorrow for our today.”
Posted by Claude Arpi