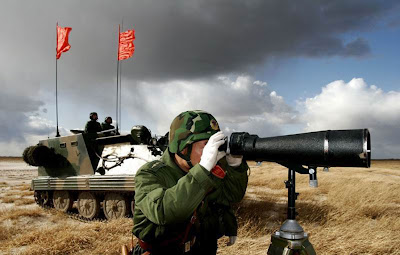 There is now "a proportionate focus towards the western and north-eastern fronts", said Army Chief General Deepak Kapoor.  The fact that the Army China finally considers China as a potential enemy at par with Pakistan, is good news for India.
Point No. 2: "the Army needs to `optimise' its capability to effectively counter both military and non-military facets' of asymmetric and sub-conventional threats like WMD terrorism, cyber warfare, electronic warfare and information warfare" is also crucial.

Army reworks war doctrine for Pakistan, China
Rajat Pandit, TNN 30 December 2009, 04:32am IST
NEW DELHI: The Army is now revising its five-year-old doctrine to effectively meet the challenges of a possible `two-front war' with China and Pakistan, deal with asymmetric and fourth-generation warfare, enhance strategic reach and joint operations with IAF and Navy.
Work on the new war doctrine -- to reflect the reconfiguration of threat perceptions and security challenges -- is already underway under the aegis of Shimla-based Army Training Command, headed by Lt-General A S Lamba, said sources.
It comes in the backdrop of the 1.13-million strong Army having practised -- through several wargames over the last five years -- its `pro-active' war strategy to mobilise fast and strike hard to pulverise the enemy.
This `cold start strategy', under a NBC (nuclear-chemical-biological) overhang, emerged from the `harsh lessons' learnt during Operation Parakram, where it took Army's strike formations almost a month to mobilise at the `border launch pads' after the December 2001 terrorist attack on Parliament.
This gave ample opportunity to Pakistan to shore up its defences as well as adequate time to the international community, primarily the US, to intervene. The lack of clear directives from the then NDA government only made matters worse.
"A major leap in our approach to conduct of operations (since then) has been the successful firming-up of the cold start strategy (to be able to go to war promptly)," said Army chief General Deepak Kapoor, at a closed-door seminar on Tuesday.
The plan now is to launch self-contained and highly-mobile `battle groups', with Russian-origin T-90S tanks and upgraded T-72 M1 tanks at their core, adequately backed by air cover and artillery fire assaults, for rapid thrusts into enemy territory within 96 hours.
Gen Kapoor identified five thrust areas that will drive the new doctrine. One, even as the armed forces prepare for their primary task of conventional wars, they must also factor in the eventuality of `a two-front war' breaking out.
In tune with this, after acquiring a greater offensive punch along the entire western front with Pakistan by the creation of a new South-Western Army Command in 2005, India is now taking steps -- albeit belatedly -- to strategically counter the stark military asymmetry with China in the eastern sector. There is now "a proportionate focus towards the western and north-eastern fronts", said Gen Kapoor.
Two, the Army needs to `optimise' its capability to effectively counter `both military and non-military facets' of asymmetric and sub-conventional threats like WMD terrorism, cyber warfare, electronic warfare and information warfare.
Three, the armed forces have to substantially enhance their strategic reach and out-of-area capabilities to protect India's geo-political interests stretching from Persian Gulf to Malacca Strait.
"This would enable us to protect our island territories; as also give assistance to the littoral states in the Indian Ocean Region," said Gen Kapoor.
Four, interdependence and operational synergy among Army, Navy and IAF must become the essence of strategic planning and execution in future wars. "For this, joint operations, strategic and space-based capability, ballistic missile defence and amphibious, air-borne and air-land operations must be addressed comprehensively," he said.
And five, India must strive to achieve a technological edge over its adversaries. "Harnessing and exploitation of technology also includes integration of network centricity, decision-support systems, information warfare and electronic warfare into our operational plans," he added.
Apart from analysing the evolving military strategy and doctrines of China and Pakistan, the Army is also studying the lessons learnt from the US-launched Operation Enduring Freedom in Afghanistan in 2001 and Operation Iraqi Freedom in 2003 and their relevance to India.
Posted by Claude Arpi